On Wednesday 23rd November, members of An Garda Siochana visited the school to give a talk on Road Safety to all senior cycle students. This talk was organised by Kara Mitchell as part of her contemporary issues task for her Social Education Module. First Year Business Studies students decided to set up a mini company which created and sold a Late Late Toy Show Goodie Bag. They also included a permission slip to stay up late – which is for one night only!.
All bags sold out very quickly due to the attractive display and competitive price.
Ms O Keeffe is very proud of the quick thinking students: Katie Wilford, Colleen Whelan, Julia Jurczak, Shauna Gaynor and Saoirse Ryan. Well done young entrepreneurs. 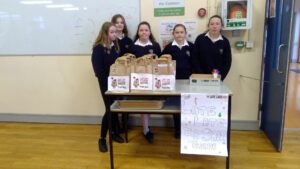 Congratulations to the Junior Cert class of 2022 on their excellent results.
Pictured are some of the students who received their results today with their Junior Cycle year head Ms. Sammon. 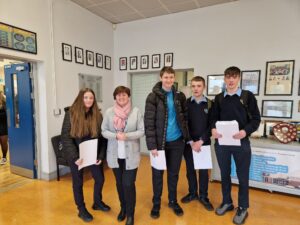 In March of this year, a group of our then TY Students worked with the Young Irish Film Makers over 3 days to write, direct and edit their own short film.
The Nenagh Arts Centre recently contacted our school to inform us that the group had won the award of “Best Short Film” for the Action Thriller – “Michael Man 2 – The Revenge of Evan”! Well done to the 8 students involved for their creativity and excellent acting skills – Sarah Jane Bourke, Michael T Collins, Aidan Maher, John O’Meara, Michael McKibbin, Evan Quigley, Seamus McKenzie Cleary & Maciej Andrzej Lis. Thank you to all the students who took part in this year’s Christmas Shoe Box Appeal with Team Hope. It was a huge success with close to 50 boxes donated by both students and staff! They’re sure to bring lots of joy to children around the world this Christmas. Nenagh College Transition Year students at work on their laptops, as part of our pilot programme for introducing the use of laptops, exclusively, throughout the school. From September all students in 1st year, Transition Year and 5th year will use devices, only. We are saying goodbye to the heavy school bags and expensive schoolbooks, and welcoming the school’s latest technological advances .